ES: could you please describe your painting in few words?

SM:  I would say that my paintings are mostly the expression of my understanding of the word at the macro and also more at the personal level. This understanding is usually fuelled with significant events which have marked my personal life but are fading away with time. The tools I use to express these feelings are the mirror construct of these indelible yet fading feelings, pastel being a symbol of a fading memory and the Gel Pen on the other hand the indelible mark for the milestone that these events represent.

ES: what is the most important point in your life?

SM:  I would say the health and happiness of my family and friends.

ES: we can’t talk about Iran without talking about politics, could you please comment on what is your take around the relationship between Iran and the West?

SM:  the short answer is that I am apolitical. There are too many factors to discuss to have a constructive point of view on this topic especially if one has only been exposed to the West point of view. As an artist there is not much I can do other than hope that the relationship with Iran will be the one of an ally rather than an enemy. Iran has a very rich history with an ocean of untaped culture which I am, humbly attempting to promote.

ES: could you tell us few words about Jardin Persan?

SM:  Jardin Persan is a business I invested in in the early 90s which essential imports antic Persian rugs in Europe. Through the years though it became more than that. It first became my private office in which I did some of my architecture related consulting work and later my paintings atelier. My husband makes fun of me about this business aspect of Jardin Persan as I mostly import antic expensive rugs on which I make minimal commissions and sometimes even refuse to sell to what I consider irresponsible clients. Banter flies constantly at home around the profitability of this activity but I do enjoy my lifestyle which is the most important aspect.

ES: could you tell about the reason why the Griffin symbol appears in many of your paintings?

SM:  what you call the Griffin represents to me the Simurgh which is a symbol ubiquitously referred to in the Persian literature and methodology. Many of my paintings refer to these methodologies. I sometimes like to make these Simurghs disproportionate and almost childlike so as to push people to ask me about the mythology associated to the painting as opposed to let people limit themselves to the aesthetics or rather the exactness of the anatomy. I always thought that arts is as much about the story it tells than the beauty it portrays.

ES: Could you tell us what you do with your earnings?

SM: Painting is a passion for me, I am not selling my painting to earn money. The monetary aspect has for sole objective to make sure that the paintings go to someone who is appreciative of art and culture. Otherwise, I spent the totality of my earnings towards purchasing paintings from other artists.”

Marie-José Bouscayrol point of view: Shahla Moazzezi has kept an enlightened memory of her Iranian childhood. She carries in her, the wisdom of a multi-millennium culture. Very young she learnt the refinement of the occident and has perfectly assimilated it. Today she splits her life between France and Iran and her art nourishes itself from the narrow sentimental link which she maintains with her birth country.
Shahla Moazzezi only paints when she feels the need to express an emotion, which is usually born from an event, a thought, a memory, a meeting with a particular character or poetry. It is indeed her private garden that she paints with the pastel art medium on a black background. It happens that she decides to partially open the door of this garden and invite us to join her in her journeys built of memories and mythological inspirations.
In the secretive confines of her atelier, Shahla Moazzezi builds a rare masterpiece and very personal, fingerprints of the oriental culture inherited from her country of birth, Iran. Shahla Moazzezi is a warrior who believes in the forces of life and hope as the ultimate victor against death and hatred. Her work is at her own image, enlightened, subtitle and strong. She works with pastel with a dark background most of the time. The colors strike like lighting but harmonious at the same time around the milestones told in the stories of her paintings. Both safe haven as well as source of strength, each masterpiece carries rituals, symbols and mythologies straight from the Orient. Shahla Moazzezi nurtures her paintings from an emotion, a painful memory, or an anger from the past. The story unravels around a central point which acts as an essential maelstrom of feelings inhabited within the painter. World citizen, she knows that her life is always elsewhere, this elsewhere who could perhaps tear her, she decided instead to make of it an ally, a force within her. Her philosophy of existence is based on a frontier that paradoxically frees her mind. Frontier between life and death, pain and happiness… Accordingly, her life which could become a long wandering becomes instead a succession of routes, a gateway between several universes which nurtures her thoughts and artistic contributions, as she feels that happiness is only obtained through patience.
Jean-Louis Depierris point of view: If anyone carries within himself images, symbols and myths of humanity, it is for the designer that their implementation corresponds to a silent internal necessity. As it is this implementation which exposes, the most secret characteristics of Man. Through the attraction that these images impact the spirit, the designer overrides the conditions of the history, and reintegrates the archetype of Man, his primordial unity, which he cannot possibly realize in the closed world of the moment. It is through these means that he rediscovers the existence of a lost paradise. The symbols of the desires, the enthusiasm or the nostalgias projects the designer in the creation of an awaken dream, where spirit and the hand utilizes images to attempt to abolish the constraints, and capture, through their rays of significance, the ultimate reality of the universe, but also, for the designer, the most intimate. It is this imprescriptible domain of being that Shahla Moazzezi rediscovers in her painting. Her imagination swims at the heart of life symbols and lives in myth and theologies. 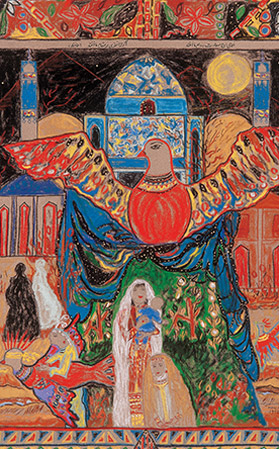 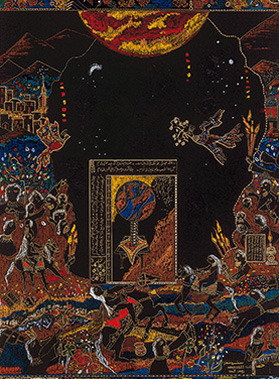 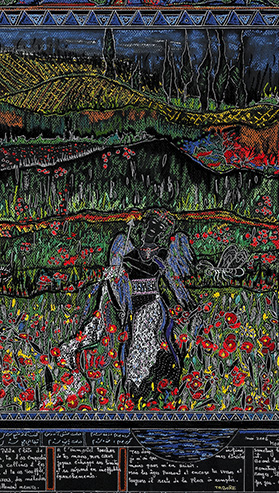